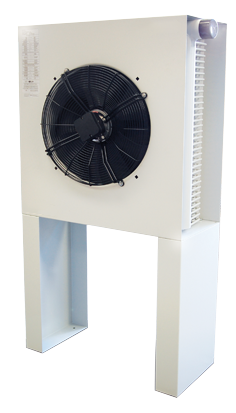 Today aftercoolers are normally built into the compressor and it is therefore not necessary with this step. However, it still has uses like sand blowing and other areas, where this filtration of compressed air is the most used.

The aftercoolers that is in the AfterCooler AIR series uses the air around the cooler, to cool the released compressed air at the compressor at an exit temperature of only 10° C higher than the surrounding temperature. This cooling makes condensate of up to 80 % of the moisture in the compressed air. The condensate is then being collected and dispersed in the cyclone, that is installed at the aftercoolers drain.

Aftercoolers from the AfterCooler Water series allows for efficient cleaning of compressed air by cooling the air at the drain of the compressor, and has a drain temperature of only 10°C higher than the inlet for process water. This cooling makes condensate of up to 80% of the moisture present in the compressed air. This condensate can then be separated by the cyclone separator, that is installed at the drain of the aftercooler. The AfterCooler Water series has a robust design adjusted for the extreme conditions with normal industrial assignments. It has a carbon steel container with cobber piping, that can also be used for seawater.

The Cyclone separator system guarantees safe separation of water from your compressed air. The cyclone is technical superior because of its construction. The cyclone is made from the same three-part filter housing construction, that is specially made for the cyclone element. The filter has an automatic working float drain and/or an auto drain. The robust connections make it possible for filter housings to be combined in a safe and simple way, with the same surface.

You can find datasheets for all of our products in our datasheet library.